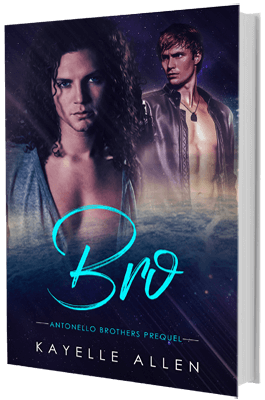 The new Thieves’ Guild technology
might make him invisible,
but it can’t shield him from the truth…

The prequel to the Antonello Brothers Science Fiction Romance series, Bro is Sci Fi from the sweeter side of the galaxy. 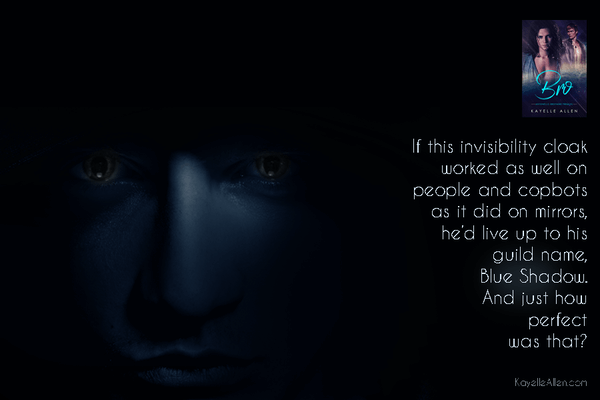 Senth Antonello had attended classes at the Thieves’ Guild Academy every day since he was what? Three? Yet the looming entrance to the exclusive Advanced Level access that he’d more than earned stood empty, while he skulked in the shadows like he hadn’t.

Plunging through that door always felt like he was flying into a beehive while sporting hornet wings.

He ought to zip up there and let idBot scan him.

He took two decisive steps forward, then pivoted and took five steps back.

“Come on, Senth,” he berated himself. “Go for it. Now.” He turned around and faced the entrance. “This time will be different. You can do this. Just go in there.”

And why was that?

Because there were times being the best got you nothing but hated and looking like a kid got you nothing but disrespect. Being the adopted son of a former grand master had distinct perks, true. It got him in ahead of others, but then that was part of the problem, wasn’t it?

Nobody feared a clawless halfbreed who looked twelve when he was eighteen.

“I will do this. The time to act is now.” He stepped up and let the automated idBot system scan him.

Why couldn’t people treat him like that machine? Senth released the tension in his shoulders, and rolled his head to soothe his neck.

Maybe today would be different.

Maybe undergrads would respect him for his level.

Maybe his dad would ask him how he was doing instead of going behind his back to the Grand Master.

Maybe nobody’d meow when he entered the room.

Oh, and maybe the Empress would eliminate taxes, and while she was at it, free all the slaves. Because, sure. That could happen.

Inside, down the first hallway, monolithic carved wooden doors of the Great Hall stood open. The pickup line for upgraded cloaks wound down the stairs and then back and forth across the cavernous hall like one of those rides at Planet Fun.

Voices. Noise. Din. A hive of thieves anxious to score.

No sound suppression in the empire could mute the hum careening off these stone walls. Not today. Not with the first cloak upgrade in ten years minutes from release.

He took one last, sole-dragging step, entered the hall, and made straight for the grand staircase.

The entire queue of lower-level thieves craned their necks at whoever had entered. Their low buzz faded from front to back, and what do you know? Right on cue, a chorus of meows rose from the anonymous safety of the back row.

Senth halted and snapped his head in that direction, but the sound cut off.

No one in view so much as cracked a smile.

He tossed them a lazy salute and turned back toward the stairs. The conversational drone kicked right back in. After all, no one important had entered. Just the halfbreed.

Where to buy Bro

Prequel to the Antonello Brothers Series

Senth Antonello: Fun-loving. Half-human half-feline humanoid. Professional thief. What determines whether Senth can open a lock? One thing: If it’s in reach.

Khyff Antonello: Hope-less. Human. Professional pleasure-giver caught in a soul-crushing predicament. What drives him? His freedom, just out of reach — and the desire for revenge on the one responsible for his slavery; the brother he thought died at birth.

Luc Saint-Cyr: Power-magnet. Human-ish. Adoptive father of Senth. The empire calls him The Man, ruler of a thousand questionable ventures with enough power and wealth to buy a planet. What Luc wants? To protect the only person he’s ever considered family.

Once these brothers meet, the Tarthian Empire will never be the same. Neither will the man who brings them together.

The content on this page may use referral links for which I am compensated. The links do not result in a higher price for you. Because of promotions or relationships, these links might provide savings. Read the disclosure policy for more info.

Download a printable list of books and check off stories as you read them. The list also shows the reading order for different series. It's updated with every book and the URL to reprint it is in the footer. When you visit your favorite bookseller, type "kayelle allen" in the search box. Ask for my books at the front desk of your library or on their ordering system. Follow my Amazon Author Page and get one alert when a new story is available. Smashwords will allow you to add me to your favorites. Do you like to read good books? How about free books online? Join the Romance Lives Forever Reader Group and download free books and find out about new books coming soon. You'll get one free book immediately and two more free, full color illustrated books the next day. You can unsubscribe at any time.